This web site is edited by the Data Science Center Eindhoven (DSC/e). For any question concerning this web site or its content, do not hesitate to contact us at the following email address: 2016@data-forum.eu. Graphical and software components of this web site have been designed by the STI, EDF and KMi.

On this web site, EDF presents the European Data Forum 2016. The objective is to give information up-to-date and as accurate as possible.

The present liability section is not intended to limit any requirements laid down in applicable law or to exclude DSC/e’s liability for matters which may not be excluded under applicable law.

Any litigation related to the use of this web site will be submitted to Dutch law and belongs to the exclusive Dutch jurisdictions.

Personal information is collected on this web site only by one’s voluntary registration for example by subscribing to a newsletter. The collected information will not be transferred to any commercial company or organisation in the Netherlands or overseas.

In conformity with the modified law of 2 August 2002 on the Protection of Persons with regard to the Processing of Personal Data, you have the right to access, rectify or object to this information. To exercise this right, contact the Data Science Center Eindhoven DSC/e (e-mail: 2016@data-forum.eu).

This website uses Google Analytics, a web analytics service provided by Google, Inc. (“Google”). Google Analytics uses “cookies”, which are text files placed on your computer, to help the website analyze how users use the site. The information generated by the cookie about your use of the website (including your IP address) will be transmitted to and stored by Google on servers in the United States. Google will use this information for the purpose of evaluating your use of the website, compiling reports on website activity for website operators and providing other services relating to website activity and internet usage. Google may also transfer this information to third parties where required to do so by law, or where such third parties process the information on Google’s behalf. Google will not associate your IP address with any other data held by Google. You may refuse the use of cookies by selecting the appropriate settings on your browser, however please note that if you do this you may not be able to use the full functionality of this website. By using this website, you consent to the processing of data about you by Google in the manner and for the purposes set out above.

Digitalization is clearly impacting manufacturing in the same way that it has revolutionized the business world and consumer markets.Industrie 4.0 resembles that next level of manufacturing: Production based on cyber physical systems.

Such digital enterprise is fundamentally more economically efficient than others that haven’t embraced digital technology, integrating information, processes, work and people so that the entire organization can collaborate more efficiently and effectively.

Manufacturers recognize the need to respond to with significant speed, flexibility and efficiency improvements of their production.

This is to be achieved by implementing a holistic digitalized approach stretching over the complete value-chain including suppliers.

Siemens provides a solution to that development with its Digital Enterprise Software Suite. It describes the end-to-end integration of PLM, MES and automation throughout the entire value chain, with Teamcenter as the data backbone.

Thereby, Siemens offers Softwaretools to build a complete Digital Twin that replicates the customers product plant and process in a virtual world. Customers can now optimize their manufacturing operations, and guarantee the manufacturability of new products.

Yet, a Digital Enterprise is only as efficient as the assets at the heart of its manufacturing operations. A failure of a critical machine can destroy the speed, efficiency and agility that the customer’s business relies on. Siemens is using big data to optimize the performance of our customers plant via “MindSphere”, a cloud-based open platform to connect, monitor and optimize plant assets and plants performance.

After all, the lifecycle of a manufactured product itself does not stop when delivered.

“Omneo” captures, cleans and contextualizes data from every phase of the product lifecycle and delivers insights to help all the stakeholders of the Digital Enterprise provide the best service to their customers. 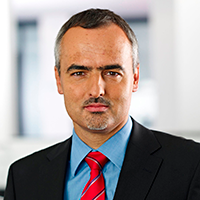 After completing his studies in physics followed by a doctoral thesis in computer science at the University of Karlsruhe, in 1997 Weckesser started his career with Siemens in Erlangen. There he was a project manager in development for the Motion Control (MC) business area of the then Automation and Drives (A&D) Group. Two years later he took on a position in Nuremberg at the former A&D Automation Systems (AS) business, and from 1999 to 2004 he held various positions in the areas of development, product management, business development and strategy. From 2004 to 2007 Weckesser worked in Atlanta, Georgia, where he was responsible for the profitable expansion of local A&D AS business activities. In 2007 he moved back to Nuremberg and took over productject management for Simatic HMI (Human Machine Interface) and IPC (Industrial PCs). In October 2011 he was named CEO of the Value Services Business Unit of the Industry Sector Division Customer Services and in October 2014 he was appointed CEO of the Business Unit Customer Services within the Digital Factory Division. In January 2016 he became COO (Chief Operating Officer) of the Business Unit Product Lifecycle Management within the Digital Factory Division.

The post-event report of EDF16 is herewith published, providing an overview of the event, and sharing insights in attendees and their origin, as well as sponsoring and finance. The EDF 2016 Final Report can be downloaded here (PDF, 3MB) We are looking forward to...

Dear EDF 2016 attendants, We hope that you enjoyed the European Data Forum (EDF 2016) organized as part of the Netherlands EU Presidency. The 2016 edition that took place in Eindhoven reinforced EDF's position as the premier EU event on data science and big data. The Data Science Center Eindhoven (DSC/e) is proud to have organized EDF 2016 together with ADS, EC and many other partners. The...

Our sponsorship packages are especially designed to help you spread your message to a wide range of attendees from European industry, researchers, policy makers and users alike.
If you are interested in becoming a sponsor of EDF2016 please visit our Sponsors page.

Read Tweets from the EDF2016 Community